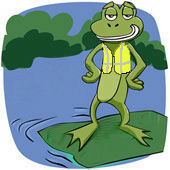 The story behind POKES

We met the Safety Frog one evening while our officers were coming back from Swamp Run here in Upshur County. They were driving along when suddenly several frogs started hopping out from the ditch in front of them. Not wanting to hit the frogs, the officers stopped their patrol car.

As they waited for the frogs to cross, they noticed a shiny silver gleam in the headlights. When they got out of their car to investigate, they found a frog with a bright yellow safety vest hopping along slowly! As they watched, the frog would hop, look side to side, and hop again. When asked what he was doing, the Safety Frog replied he was looking both ways for traffic before crossing the street!

Our officers were so impressed by his safety awareness, they asked him to be the official safety spokes-frog for the Buckhannon Police Department. We were very excited when he said “Yes”! The only issue was the Safety Frog did not have a name. The police department turned to the community to help with the naming of the Safety Frog, specifically asking the Upshur County Head Start classes for input. After the classes submitted their suggestions, a special committee chose the submission made by Mrs. Bailey’s Head Start class. The class submitted POKES, which is short for Police Officers Keeping Everyone Safe. POKES the Safety Frog now travels with our officers to schools and public events to teach children about safety.

In his spare time, POKES likes to lay on the beach, swim, and listen to music. His favorite foods are mosquitoes and horse flies.

Walking to the bus stop